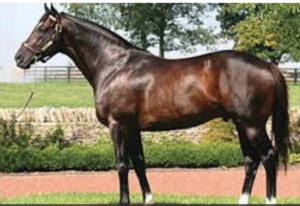 So when I saw this article I was happy to see that Medaglia d’Oro — Rachel Alexandra’s sire — is being appreciated for his bloodlines. It does seem that Dolph was right on track by identifying the stallion as an outstanding speciman.

Elate is one of 112 black-type winners and 21 Grade 1 or Group 1 winners sired by Medaglia d’Oro, who is both one of the best and perhaps the most versatile of contemporary American sires. Winner of eight of 17 starts and three Grade 1’s, including the Travers, Medaglia d’Oro helped make his sire El Prado leading sire in 2002. Eleven of Medaglia d’Oro’s Grade 1 winners were dirt horses and 10 turf runners at distances varying from six furlongs to 1 ½ miles.

Here is the full story, if you are interested…