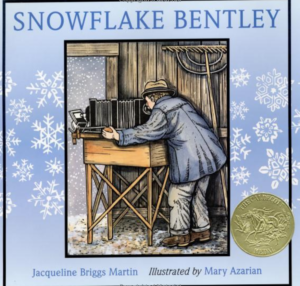 I have read a lot of books in my life. But Snowflake Bentley, by Jackie Briggs Martin, stands out in my mind because it was the first picture book biography I’d ever seen of someone who wasn’t already a household name. The book came out the year my oldest child was seven. She is now 27…. It was a revelation. Wilson “Snowflake” Bentley was an ordinary man who did amazing things.

When I read that book I was blown away. I also was jealous. Jealousy is a terrible thing. Except when it is not. This is the second (maybe third)* time in my writing life that I was inspired by jealousy. Ms. Martin was doing something I wanted to do. I wished I’d written Snowflake Bentley, yes, that’s part of it. But in a bigger way, my reaction helped me realize I wanted to read about (and write about) people like that. Ordinary people and their extraordinary achievements.

In my paid work as a writer for alumni magazines and the like, I was constantly interviewing and writing about people who had led interesting lives, but it wasn’t until I read Snowflake Bentley that it occurred to me I could write those stories for kids.

And now, more than 10 years later, I am on that path; the path my jealousy helped me find. I have published one non-fiction book about a female racehorse (Rachel Alexandra) that held the racing world — and many outside the rarified world of Thoroughbred racing — in thrall for the glorious year of 2009. When I go to schools and tell them Rachel’s story many times the group gets excited because 2009 was the year they were born. Soon the school groups I address won’t even have been alive in 2009, but they’ll still know the story of this remarkable filly, who deserves to be better known (just like Snowflake Bentley and so many others) and whose story I will work to keep alive. And I continue to work on other biographies of other “ordinary people (or horses) doing extraordinary things.”

So thank you Jackie Martin, both for Snowflake Bentley and for your outstanding presentation about picture book biographies April 7 at the Iowa SCBWI non-fiction event.

*The other two times?

1) jogging with two friends who were discussing their children’s book-writing projects and I was jolted by a deep jealousy. “I want to do that,” I remember thinking.

2) reading a collection of profiles edited by Walt Harrington. Again, mostly ordinary people leading exceptional lives. But this was before I found my way into children’s book. There is a thread here, though, right?