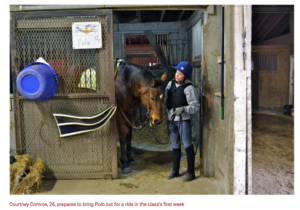 Where do jockeys come from?

It amazes me that, until last week, I never really wondered that. I always read about how this or that jockey “came up from” a small dirt track in one rural area or another. I guess I always assumed they learned their craft in the proverbial “school of hard knocks.” Most jockeys, prior to 2006  at least, must have learned mostly by living at the track and grabbing any opportunities they can to ride.

But I learned last week that there is in fact something informally known as Jockey School. Officially known as the North American Racing Academy —the only professional jockey school in North American — the program was created by famed jockey Chris McCarron in 2006. NARA is part of Bluegrass Community and Technical College, which is based in Lexington, KY.

In addition to the “jockey pathway” at NARA, there is also a “horseman path.” So if you love horses, but you don’t necessarily want to risk your life racing at up to 40 mph around a track with thousands of pounds of horseflesh pounding around you, then you could train to be a groom, a trainer, a breeding farm manager or other skilled roles in the horse racing world.

These days the program is led by Remi Bellocq, who, like McCarron, has also spent his life at the racetrack — though not as a jockey. Before leading NARA he was the chief executive of the National Horsemen’s Benevolent and Protective Association.

Here is an article from the Paulick Report that gives you an idea of the program. Happy Trails!

Inside The North American Racing Academy: Only The Strong Will Survive