I realize it’s early July and virtually (literally?) no one is thinking about school right now. Not teachers, not students, not even members of the PTA. But still, I want to tell you about how much fun I had visiting two schools last month…actually, to be accurate, it was May. I cannot believe how fast time flies! 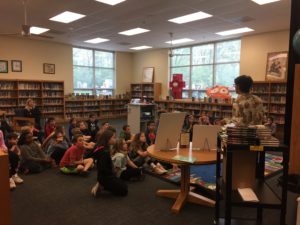 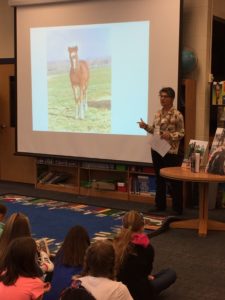 One school, Wild Rose Elementary, was in St. Charles, IL. The other school, Puffer Elementary, was in Downers Grove, IL.  For me, one of the best parts about my presentation was playing the video of one of Rachel’s races and watching the audience, both students and teachers alike, as they rooted for Rachel.  At first they were worried – she wasn’t in the lead- and then they were relieved – she took the lead – and then they were gasping and clapping *really clapping* as she tore away from the field in an epic finish. So, so fun to share Rachel’s amazing story with all these appreciative people!

At first i was nervous that I wouldn’t be able to be engaging enough to keep everyone’s attention. That was especially true when I learned – the day before my visit – that I would be speaking to 150 students at Puffer. Yikes! But it all worked out. First of all, both schools hosted me in their libraries, not some big cavernous auditorium. I’ve never been to a library I didn’t love and these school libraries were no exception. They were cozy and welcoming and really really well equipped so that I could easily run my videos and show my photographs. Second of all, I discovered that I love public speaking. Who knew? I have a presentation, sure, but I also just let my own enthusiasm for my subject show. And I think it worked quite well, if I do say so myself.

The fact that I like public speaking was something of a surprise, but I had an even bigger surprise at Wild Rose Elementary. There  I met four students, Nora, Annika, Sean and Owen who had the idea to use ozobots to re-enact a horse race. For those of you who aren’t familiar with ozobots, they are little robots that can move around by following any dark line you make with a thick marker of any kind. I am attaching the video so you can see what they did. 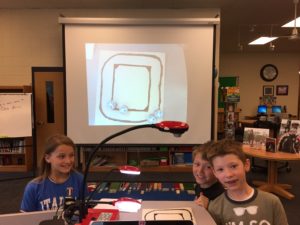 Before my presentation they ran their “horse race.” Here you see Annika, Owen and Sean. Nora is not pictured. Of course one of the ozobots was named Rachel and the others had really funny names. Owen was a natural racetrack announcer. That’s quite a skill. It’s like being a good auctioneer; talk fast and think faster!  I had so very much fun in both schools. The teachers were engaged and energized. The kids were so enthusiastic it was a joy to be there. It’s easy to believe only what we read in the newspaper about failing schools and uninspired teachers and it was a fantastic reminder that most/many schools are full of passionate, dedicated and talented teacher and kids who are excited and curious about the world.

So if you are a teacher or parent or student reading this and you wonder if I might come to your school, please contact me!