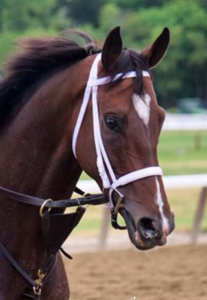 Last week I saw an article in which the writer thought Rachel Alexandra was in the top 20 best horse names and, I admit, I was surprised. I was always vaguely disappointed there wasn’t a better story or at least a clever pun in Rachel’s naming. Rachel’s breeder, Dolphus Morrison, told me he was running out of ideas for names and decided to name her after one of his two granddaughters. He also named a horse Samantha Nicole, after his other granddaughter.

That explanation never really thrilled me. But it turns out it is kind of hard to name a racehorse. The Jockey Club, the organization that is the gatekeeper for all Thoroughbred names, among other things, has strict rules regarding naming. Those include, no name can be longer than 18 characters; it cannot be made of all numbers; any number higher than 30 have to be completely spelled out. The name of a horse that has won an major race is retired, but other names can be recycled once that horse retires. Secretariat, the racehorse for the ages, was the 11th name submitted by his owner to the Jockey Club. The first 10 had been rejected! Also, a horse cannot be named after a living person without that person’s express, written permission. This explains, in part, why the name Rachel Alexandra stands out.

What does go into a horse’s name? Consider the names of horses just in last Saturday’s Preaknss Stakes, which was won by Cloud Computing. There was Classic Empire, Always Dreaming, Senior Investment, Term of Art, Conquest Mo Money, and Multiplier among others. Sometimes horses are named to honor one or the other of their parents. Seabiscuit, the famous racehorse from the 1920s, had a name that honored his sire, Hardtack. A seabiscuit is a kind of cracker or dry bread sailors eat on a long voyage. 2009 Kentucky Derby winner Mine that Bird is the offspring of Birdstone and Mining My Own.

So when I really stop to think about it, Rachel Alexandra is a regal name, which is quite fitting. And naming a horse with something that also works as a human name, while rare, does carry a certain panache…depending, of course on the name!